There has recently been a proliferation of cameras and sensors on-board ground and airborne platforms for situational awareness applications. This means there is a growing challenge of how best to provide operators with as much usable visual information as possible while ensuring that the data is readable and actionable in real time. Adding to the complexity of the problem is the fact that the operator is typically limited, because of space, weight and power requirements, with a single display screen.

If the operator has to switch between views to access the information to gain good situational awareness, the result can be delays and an incomplete picture that hinder the mission. This includes alternating between different layers of information from numerous different sensor feeds. The video should be presented to the user in a way that helps them meet their objectives as poorly displayed information can cause confusion that can be detrimental to the mission.

The most effective video management systems (VMS) enable a platform’s crew to control their video options – such as sensor inputs, screen configuration, underlay maps and video recording –directly from their touchscreen display. When a crew member’s display also serves as the VMS control center, complete control of surveillance video comes at the touch of a button. The principal advantages of a VMS are simpler integration and maintenance, reduced cost and higher reliability (simplified inter-unit cabling), and flexibility and scalability for platform upgrades.

A VMS is typically characterized by

Depending on the platform, there may be wide variation in how many sensors are supported. Another consideration is whether there is support for mapping or any other third-party applications. One important feature of a VMS is the user’s ability to switch from view to view. Without support for picture-in-picture (PiP), the operator would need to have multiple screens in order to view the different video inputs, instead of a single screen that can handle, for example, up to four different inputs. Without the ability to display all four video sources simultaneously, the operator has to switch between the individual inputs.

The goal should be to provide the operator with as much actionable video information as possible in real time. Anything that gets in the way of that is detrimental. Anything that increases the number of clicks required to navigate between the different views complicates the operator’s user experience. If the display supports quad view with four different windows, the operator can simply tap on the one they are interested in, and that becomes the single view. Any of the four windows can be selected. Pressing a different button minimizes that window, returning the display to the quad view again. Ideally, the display will support the custom configuration of “soft buttons” enabling the touch controls to meet the intuitive expectations and habits of the user.

A key differentiator in rugged touchscreen displays is their readability in direct sunlight. For superior readability the screen should support anti-glare and reflection technologies. This ensures that no vital information will be missed because of how the sun reflects on the screen. Another concern is how well the display supports the use of night vision (NV) technologies. For many applications, especially in military aviation, night vision goggles (NVG) are used. It is critical to ensure that the display can be easily read when the operator is wearing NVG. It’s also important to ensure that the screen is visible during night vision lighting without goggles. For example, in ground vehicles, where the operator might not be wearing NVG, the entire cabin might be placed into NV mode. The screen must remain readable with or without goggles.

The key to developing a rugged display that maximizes readability is how the layers of the glass are built up. The best approach is to use optically bonded screens that are polarized and laminated with a number of different layers and heaters within the screen. The heaters ensure that the LCDs perform optimally under the full range of military operating temperatures, even when subjected to extreme cold. The optical stack should also include an anti-reflective layer and two stacks of backlighting to reduce power consumption by enabling the user to switch between low and high power modes. The result of combining these layers in the optical stack is a highly readable display in both sunlight and NV conditions.

To ensure that the display can survive the harsh conditions typical of military platforms, such as the intense shock and vibration experienced in helicopters, the VMS should be tested to the DO-160 aviation standard for electronic components and/or the MIL-STD 810G for ground platforms. These standards ensure that the equipment can withstand the shock, vibration, temperature range, altitude, and exposure to salt fog typical of military deployments.

Consider three basic types of video display solutions. The first is a very simple integration that takes inputs from the sensor and sends them directly into the display. An example of a display used in this setup would support up to 10 different inputs, of which 4 can be displayed at the same time. All of the inputs should be able to be scrolled through and selected.

In the second type of architecture, a wide variety of signal input types must be handled when connecting camera or other sensor sources to the display. When there are more inputs or different formats than the display supports natively, the application calls for the use of a video switch and converter. This approach enables the conversion of a signal input into one that can be displayed on the screen. For example, a mixture of data from analog or digital video, USB, or Ethernet input formats. When there is only one input available on the display, the video switch will enable the different outputs from the various platform sensors to be converted and combined so that they can be concentrated into a single input to the display.

A third type of VMS solution involves the recording of the video data. To ease recording and playback of video inputs the display should support control of the video recorder via a touch screen interface. The availability of a number of soft buttons on the screen will enable recording to be controlled (i.e. start record, stop record, playback, etc.) from the touchscreen display and provide an intuitive interface that replicates the buttons on the recorder on the screen. 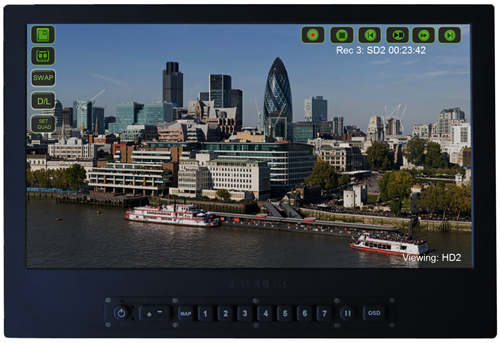 Typically, the resolution of rugged touchscreen displays for the military COTS market follows behind the commercial display technologies. Today the standard highest resolution is HD/SDI (1080p). For these applications, the high end of display resolutions will likely approach 4K in coming years. The resolutions supported by displays naturally tracks the resolutions supported by third-party sensors that are used in military applications, and these sensors do not yet typically support 4K. What’s more, the user typically sits very close to the screen, which is usually limited in size.

The practical limits of space available to a user will usually limit the size of the display used. Depending on the platform, such as a helicopter, the most important concerns are the display’s weight and power requirements. The more weight placed on the aircraft, the more fuel required, which then limits the distance and duration of the mission. Similarly, power requirements of any onboard electronics components will place burdens on a platform that can compromise other onboard systems and result in increased fuel burn. System integrators generally seek video solutions that have the least power and weight impact on a platform. These requirements often lead to, for example, a 10” display being favored, even if the room is available for a 15” alternative.

The backlighting in displays can be used to create different lighting regimes for different application areas such as using dual backlighting for NVIS operations. The dual backlight option utilizes two alternative sources of backlighting behind the LCD array, one to provide optimized high brightness and high contrast lighting in daylight conditions and a second to provide very low amplitude NVIS lighting. This means that the full color presentation of map and warning information can be provided while at the same time maintaining 100% compatibility with NVIS, enabling both goggles and head-down viewing of the displays simultaneously without conflict or compromise in performance 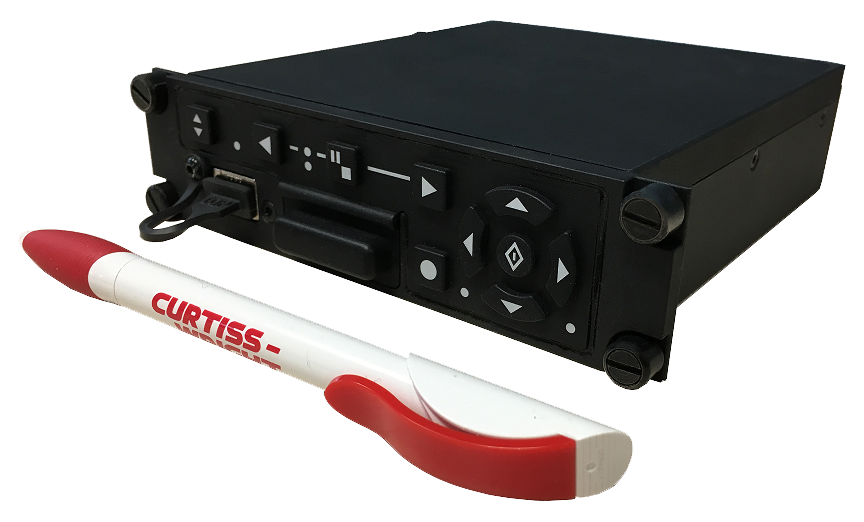 An example of a SWaP-optimized VMS (including video switching and format conversion) combined with multi-channel recording capabilities is one that uses Curtiss-Wright’s Rugged Video Gateway (RVG) range of video switches, AVDU4315 17” and AVDU5515 21” rugged displays, and the VRDV7000 recorder. The RVG switches can be stacked into a single enclosure so that the system can accept multiple video input formats and resolutions, including HD-SDI high-definition video, CVBS composite video from the camera turret, and VGA input from the mission computer. It can convert the resolution of these video feeds as required for display on any of the connected monitors, while also being able to generate composited (quad/PiP) presentations for each of the monitors, independently selectable under operator control. The multiple VRDV7000 recorders, while each able to accept up to two HD-SDI inputs, are configured at the customer’s request to record a single video stream at very high quality for evidential purposes. Operation of the system is controlled by on-screen soft keys provided by the embedded processor and graphics engine of each of the displays. All of that packaged in highly ruggerized hardware that have been military qualified and tested to DO-160 and MIL-STD 810G, to ensure that the entire system can operate in the harsh military environments it has been installed.

Kevin Rooney looks at how augmented reality is poised to revolutionize applications such as search and rescue (SAR) and airborne surveillance.

Through-armor video systems provide in-vehicle crews of manned and remote crews of unmanned ground vehicles with critical visibility and situational awareness. This vital visual information needs to be accessible as close to real-time as possible.

Making the modern video equipment work together with the platform’s legacy systems can be costly and complex. The time and effort needed to integrate a myriad of legacy and modern video formats and resolutions can both add program risk and delay deployment.

Video and image processing solutions, from the sensor to screen, have become the best way to get vital visual information to warfighters in a fast and effective manner. Providing operators the ultimate level of situational awareness is 360° video systems.