The risk of failure for avionics equipment on-board spacecraft due to radiation exposure is a critical issue for launchers, re-entry vehicles, space habitats, and satellites. A platform’s orbit trajectory and the duration of its mission determine the amount of exposure to trapped radiation and to solar and cosmic radiation sources. The overall impact that this radiation has on the avionics hardware is determined by a complex interaction of shielding, circuit design, device technology, and particle energy spectra. That’s why radiation tolerance is one of the key criteria when system integrators select avionics for their spacecraft.

The integrator’s challenge is, of course, also made more difficult by limited budgets. The problem is to mitigate against radiation effects while staying within the scope of limited program budgets and without compromising the overall Mission Assurance requirements. The good news is that there is a new approach, based on, a new type of backplane, called the “Smart Backplane,” that enables integrators to use existing, affordable commercial off-the-shelf (COTS) electronics modules in a space radiation environment, an approach called “Radiation Tolerant Space COTS.” In addition to faster time to deployment, the many benefits of this game-changing approach include significantly lowered costs for deployment, as well as the design, certification, and manufacture of space avionics. Engineers at The Boeing Company selected Curtiss-Wright Defense Solutions to supply rugged data-handling avionics for the Crew Space Transportation (CST)-100 spacecraft. The equipment gathers data from critical vehicle sensors used by onboard computers to make decisions during the flight of the CST-100, which is scheduled to undergo orbital test flights this year.

The particle radiation environment that avionics hardware confronts in space consists of highly energetic Protons, Electrons, and Heavy Ions. The two main sources of this radiation are the Sun and galactic cosmic rays. As radiation interacts with semiconductor devices it produces ionization. This ionization increases the conductance of the semiconductor material and creates tiny spikes of electrical current. Cumulatively, these current spikes and damage at the sub-micron level cause degradation of material characteristics known as Total Dose Effects (TDE). Ionization of the semiconductor material typically causes very small leakage currents, which can lead to negative long-term consequences. The accumulation of radiation events can cause slow degradation of a component’s performance, such as threshold voltage shift or decrease in switching speed, and eventually lead to component failure.

Radiation events can result in temporary or permanent disturbances to the function of a device, a phenomenon known as Single Event Effects (SEE). Over the years, as the density of ICs has increased, the size of elementary semiconductor structures has shrunk to the level where a spurious current spike produced by a single radiation particle can result in SEEs capable of disrupting the circuit’s operation. Two types of SEE are most relevant to protecting spacecraft avionics: Single Event Upset (SEU) - occurs when a radiation-induced current causes a memory structure to change its state. This results in a temporary error in device output or its operation and is commonly referred to as “soft error”. In the case of an SEU, the device is not damaged and will function properly in the future, but the data processed by the device can be corrupted.

Single Event Latch-Up (SEL) - occurs when a radiation-induced current activates a parasitic structure (e.g. transistor), which forms an undesired low-impedance path in the semiconductor structure. It disrupts the proper functioning of the circuit, and if not corrected, can possibly even lead to its destruction due to overcurrent. The circuit typically remains latched up until is powered off and afterward it may continue function properly.

The lowest-risk method to prevent radiation damage is the use of hardened components throughout the system design. However, there are drawbacks to this approach, the most significant being the cost and time associated with device hardening. What’s more, there is no guarantee that the design will meet the functional requirements. At the other end of the risk, spectrum is the Buy-and-Fly approach, where a spacecraft avionics designer opts to build a system from COTS commercial components that meet the functional and other environmental requirements of the mission (vibration, shock, temperature, etc.).

For some designers, the low cost and reliability of this approach, given that most commercial components are radiation-tolerant to several kRad (a Rad is a unit of absorbed radiation dose) is worth the very high risk that the deployed system won’t continue to function in a space radiation environment for a period of time. A new approach, for mitigating against SEUs and SELs, called Radiation Tolerant Space COTS, lies between these two risk extremes and ensures the reliability and mission assurance requirements of the system while respecting the program’s budget and schedule requirement constraints.

The Space COTS chassis’ backplane is based on a robust design that reduces susceptibility to either SEUs or SELs. This backplane is the only part of the system in which “radiation hard” components are used. The plug-in COTS modules used in the system are manufactured with commercial components but are protected by the radiation-hardened Smart Backplane. The Smart Backplane can detect an SEL event on one of the modules in real-time and correct for that event before any damage can be done, thereby ensuring normal data acquisition is resumed without component damage and with minimal data loss. The system then recovers from the SEE, and normal operation of the entire data handling subsystem is uncompromised. The breakthrough concept behind the system design is that instead of seeking to prevent radiation events, it instead quickly detects and then corrects for these events in real-time when they happen, with no damage to the equipment and most importantly, it ensures that the mission assurance, safety and reliability requirements are met.

The Smart Backplane’s design enables the use of standard plug-in COTS modules in a space environment without the need for those modules to be built using radiation-hardened components. This minimizes the cost of the overall system and enables the space system designer to leverage over 100 plug-in modules already designed for data acquisition in aircraft flight testing.

The global space sector is looking to benefit from the lower cost of applying COTS electronics equipment in ever more demanding space radiation environments and increased levels of mission criticality. Several approaches are available for designing systems that can survive the effects of space radiation. Fully radiation-hardened designs may yield the most protection, but they are also the most expensive option. The Smart Backplane chassis allows the use of high-performance COTS data acquisition user-modules in radiation-intensive space applications, lowering the cost of such a system by up to 75 percent while still meeting with the mission reliability requirements and minimizing the loss of telemetry data due to radiation events to less than 2 percent for a typical low Earth orbit (LEO) application. 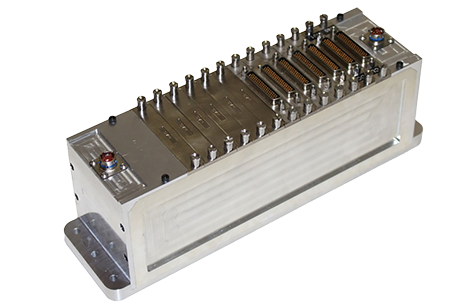 The radiation-tolerant Smart Backplane KAM-500 data acquisition system has already been selected for deployment in mission-critical spacecraft avionics systems for manned and un-manned re-entry vehicles as well as launcher upper stages and is being considered for the instrumentation system on future planetary re-entry vehicles and as the basis for low-cost, COTS-based small satellite avionics systems.

Working with ESA – leading in turn to a key contribution to the IXV spaceplane – was the catalyst to help turn one Irish firm into a full-fledged space solution company, whose customers today include NASA, SpaceX, Boeing and Airbus Defence and Space.

The fast growth of small satellites and their lower life cycle and launch costs has created a sizable market for low-cost electronic components that have radiation-resistant characteristics.