Authored by Kevin Rooney at Curtiss-Wright

Designers of liquid crystal display (LCD) systems should understand a number of important technical features before selecting a rugged LCD display for their platform. These options include environmental protection, LCD temperature and reliability, and screen reflection.

To begin with, designers must consider the need for protection from dust, sand, and salt spray: For example, a Coast Guard helicopter and its associated equipment is subject to a lot of salt spray; it will also be prone to condensation and water drips. A display that is open to the environment, whether through fans or air holes, will suffer in that environment. What’s needed is a display that is sealed or has a pressure relief valve, thereby making it appropriate for different altitudes. Airborne displays often hew to DO160, a standard specification that addresses condensation and water splashing conditions. In another example, a pressurized hose is often used to wash the floor of a ground vehicle. Displays for ground vehicles should satisfy the IP67 immersion specification, supporting immersion in the water down to a meter.

The harsh operating temperatures of deployed platforms can also affect the display’s operation. Commercial LCDs, particularly in larger sizes, don’t support the full military-temperature operating ranges. In order to operate at -40 °C, different manufacturers adopt various techniques to overcome the discrepancy between MIL-STD temperatures and what the LCD is capable of. Some manufacturers will simply provide a display with the hope that it works at -40 °C; while in many cases the commercial LCDs will in fact operate at -40, their life expectancy will be much lower. Commercial LCD materials semisolidify at lower temperatures and when switched on in that state they will be damaged. The damage may not happen right away, and the display might even pass the qualification test.

The issue lies in the lifetime reliability of the product over the full temperature range. For a rugged display, system designers should look for a preheater built inside the display to heat the LCD to its specification level before switching it on. While this preheating approach builds in delay, it does significantly improve reliability.

The main function of a military display is readability: The goal is to defeat any form of light that will reflect off the screen and interfere with the image the viewer is trying to see. All forms of LCD, glass, and plastic are susceptible to reflections, and various techniques are used to reduce these reflections. The worst-case scenario comes from early night/early morning environments, where the sun is very low in the sky and reflects directly off the screen into the operator’s eye. A more typical problem is full-daytime sunlight hitting the observer, turning the person into a brightly lit object that reflects off the screen into their own eyes. Frequently users will only specify a requirement for “very good daylight readability.” Unfortunately, such a requirement is not really specific.

Another issue is glare: Some users will specify a requirement for antiglare coating. While the coating does help, instead of eliminating glare, it instead diffuses and distributes the light reflection, so less of the reflection hits the viewer’s eyes directly. Coatings only affect the outer layer of the display’s glass. Light also goes through and reflects off the display’s inner layers of glass, and the antiglare coatings do nothing to prevent that. In a very simple display, there are often three or four layers of glass and plastics, while a more complex display may have seven or eight layers. As the light passes through each layer, there will be changes in the refractive index, resulting in some form of reflection. This distortion is made much worse by displays that have air gaps between their glass stack-up. 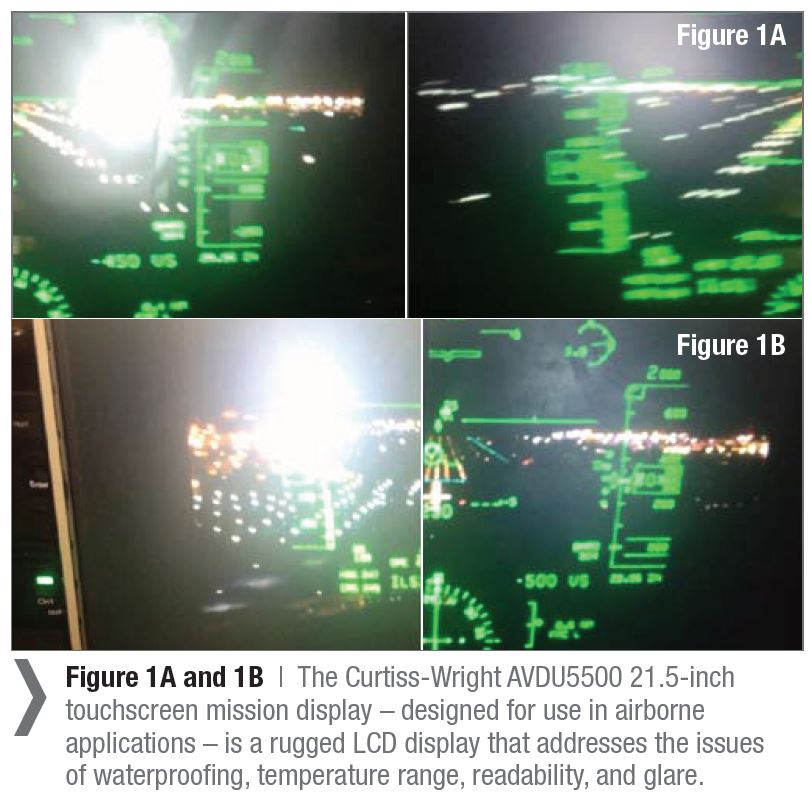 The best solution: Select a display that optically bonds each layer of glass, directly connecting them to greatly reduce the change in refractive index between layers. Ideally, a circular polarizer should be employed within the glass stack-up to polarize the light on the way into the screen. This technique rotates the polarization so that when the light reflects off the LCD or the inner layers of glass, the light is out of phase with the polarizer and cannot escape. (See Figure 1A)

Today’s modern warfighters have grown up with smartphones and tablets with intuitive, multitouch projected capacitive (PCAP) touch screens. They rely heavily on these devices in their personal lives and they expect to have access to the same capabilities and conveniences in the field.

Military-display designers continue to face stringent size, weight, power, and cost (SWaP-C) constraints while integrating commercial innovations like HD – and soon 4K – into systems that must work with legacy sensors and interfaces while also complying with a variety of open architectures and standards.

Our high-definition (HD) displays are designed for use with the industry's most popular sensors, including forward-looking infrared (FLIR) and long-range daylight video cameras. Readable in all light conditions, these rugged displays provide anytime readability to ensure you won't miss a moment of the action, no matter your application. With leading-edge functionality, including multiple video inputs, picture-in-picture, quad view, and video freeze-frame, our displays are ready for many roles, including moving map or quad view operator displays, and are ideal for use with our fully integrated video management system (VMS).