A Dual Node Single Board Computer Delivers on Performance, SWaP and Security

A Dual Node Single Board Computer Delivers on Performance, SWaP and Security

To meet the increasingly complex demands of embedded defense applications, designers can now look to dual node single board computers (SBCs) to ensure that both size, weight and power (SWaP) and enhanced security requirements are met.

Flexible and increasingly powerful, Single Board Computer (SBC) performance has seen a huge expansion in recent years, with multicore processors and faster communications links. This has made SBCs a mainstay for aerospace and defense electronics systems – but applications always demand more. 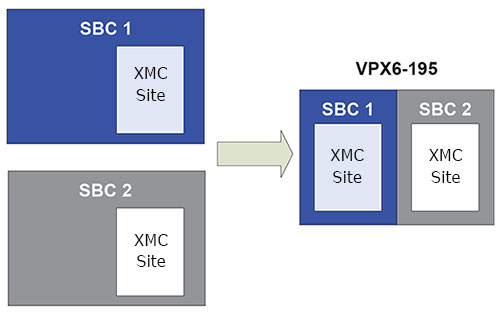 In addition to high performance within SWaP constraints, industry requirements of SBCs include:

Luckily, an advanced dual node SBC architecture can address all of these requirements.

A New Kind of Single Board Computer

The VPX6-195 is an OpenVPX™ compliant 6U SBC that exploits both the performance and the advanced input/output (I/O) capabilities of the Freescale™ Power Architecture® Quad-core AltiVec™ enabled T2080 processor. It provides two independent SBC nodes on a single 6U board, with a wide range of standard I/O. On each node, the T2080 is combined with a large FPGA and an XMC mezzanine site, providing maximum flexibility to complement the processing power.

Because the VPX6-195 is the first dual processing node Power Architecture SBC to bring back the AltiVec vector processing engine, it offers a significant advantage for customers who have invested a lot in the creation and validation of application code running on the AltiVec engine. Existing math-intensive AltiVec algorithms, as well as Power Architecture code, can be easily moved to the VPX6-195.

The VPX6-195 also enables secure separation of red/black (unencrypted/encrypted) processing. While there are ways to put in place software separation, nothing trumps hardware independence because it is the most secure and easiest to validate. On the VPX6-195 6U OpenVPX Freescale Single Board Computer any link between the two nodes can be disconnected by assembly population option, configuring the 195 as two independent SBCs on a single card.

Further security measures are built into the VPX6-195 thanks to its incorporation of the Curtiss-Wright TrustedCOTS™ (TCOTS) program. In support of TCOTS, each node’s FPGA has space for customer-specific application functionality. The T2080 processor also supports Freescale’s Secure Boot architecture, with the ability to boot t signed and encrypted images so that external key storage is not needed.

Contact Curtiss-Wright today for more information on our SBC solutions.