How Does a Modular Open Systems Approach (MOSA) Minimize SWaP?

How Does a Modular Open Systems Approach (MOSA) Minimize SWaP?

Historically, adding functionality to a vehicle meant equipping it with a new standalone system (a.k.a., the "bolt-on" or “applique” approach). Each of these line replaceable units (LRUs) came with its own cabling, power supply, and thermal management equipment – all adding no value to the platform while taking up additional space and costing extra budget. This duplication not only puts a strain on space and power consumption, but creates unnecessary integration complexity and hazards for the warfighters occupying the vehicle. What's more, finding the space to add an LRU comes down to more than just physical volume. The options for placing a new LRU may be limited by mounts and harnesses, and the orientation of an LRU's connectors can making finding the suitable space to accommodate the system a challenge.

Adding a new standalone system also comes with a variety of costs, such as qualification testing, program support, and Subcontract Data Requirements Lists (SDRLs) that can total hundreds of thousands, if not millions, of dollars. These costs are incurred each time a new LRU is added; multiplied by the number of systems in a vehicle, the cost is significant over the vehicle's lifetime.

MOSA supporting standards like the C5ISR/EW Modular Open Suite of Standards (CMOSS) and The Open Group Sensor Open Systems Architecture™ (SOSA) dramatically improve the in-vehicle situation by reframing the boundary between the A-kit (the fairly permanent set of equipment on the vehicle) and B-kit (the more variable set of equipment installed based on the vehicle variant or specific mission).

The current B-Kit model involves multiple stovepiped LRUs, as seen in Figure 1 above. To field new capabilities or technology, integrators must add or replace an LRU. In a notional MOSA architecture, shown in Figure 2 below, the LRUs in the A-Kit are not standalone boxes; instead, each LRU is a chassis that houses multiple plug-in cards (PICs). The SOSA Technical Standard defines a PIC as “any hardware element that is a circuit card that plugs into a backplane.” Other frequently-used terms include line replaceable module (LRM), circuit card assembly (CCA), board, card, or module.

The PICs are part of the B-Kit, chosen based on the platform's variant or mission. In this scenario, functionality can be integrated by adding a new PIC to an empty slot in an existing chassis instead of adding a new LRU. PICs in each system can also be upgraded to newer models if additional functionality is required or an obsolete product must be replaced. 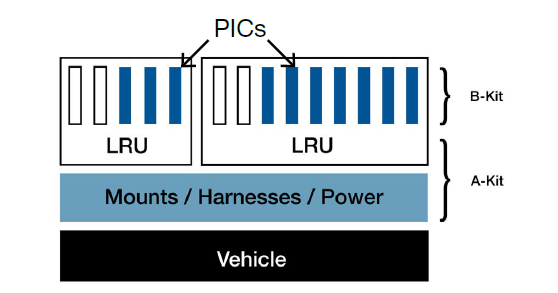 This improved A-Kit/B-Kit boundary overcomes the SWaP-C challenges posed by the current model. The elimination of stovepiped LRUs results in a dramatic reduction in the number of power supplies, connectors, mounts, and harnesses taking up space inside a vehicle. Thermal management is consolidated and simplified. Integration complexity and documentation (such as manuals) are reduced, and the in-vehicle experience is greatly improved.

While there still is a large upfront investment to implement the A-kit chassis, the future cost of adding PICs to an existing chassis to replace or upgrade functionality is lower than that of integrating a new LRU. Another significant cost reduction arises from decoupling obsolescence cycles. Certain technologies within a system, such as CPUs and GPUs, evolve quickly. In contrast, power and connector standards don't change very rapidly at all. The PIC approach allows you to replace an older or obsolete card without incurring the cost of replacing system technology that doesn't require a refresh.

With open standards like CMOSS and SOSA, all of the applications listed in the table below can be built into systems in one vehicle through the use of PICs. 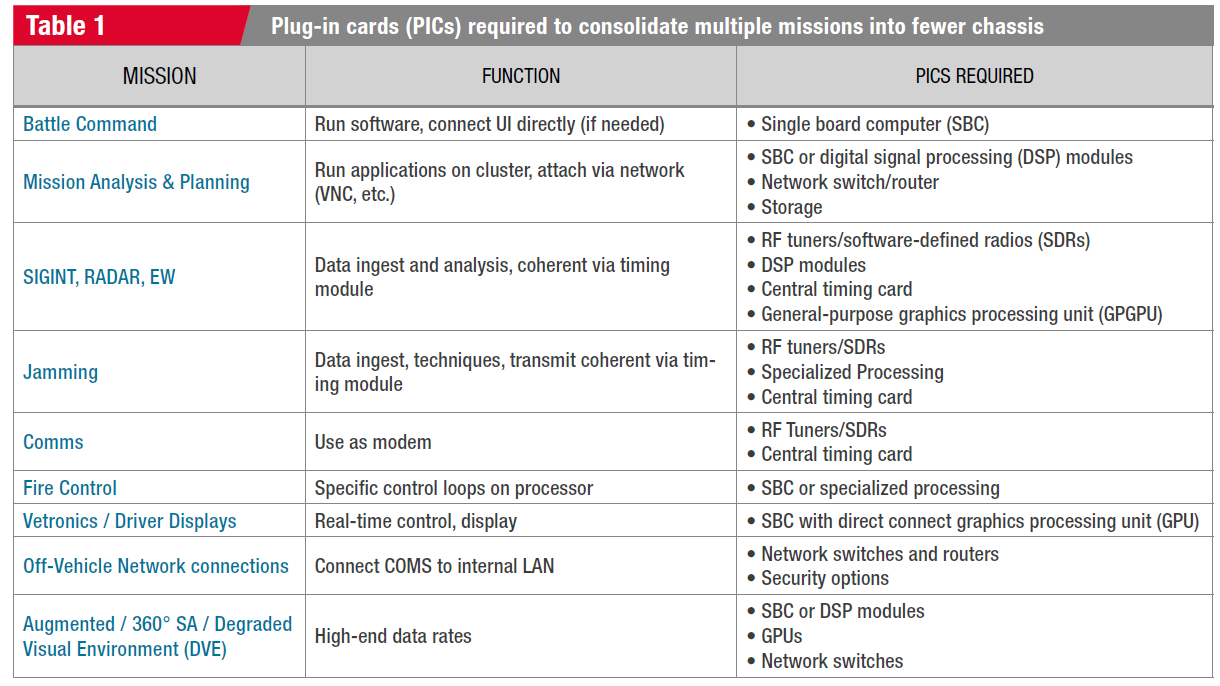 Explore our MOSA solutions or read “Modular Open Systems Approach (MOSA): Why Open Standards like CMOSS and SOSA™ Are the New Normal” for more information on MOSA open standards.

This Curtiss-Wright Position Paper aims to put MOSA (Modular Open Systems Approach) into perspective and enable you, whether a defense contractor, a decision-maker at the DoD, or a public policymaker, to put the increasingly relevant MOSA to use better.