GPGPUs Graduating Out of the Sandbox

The defense industry has shown great interest in Graphics Processing Unit (GPU) silicon for General Purpose Computing (GPGPU) since the early 2000s. GPUs were originally designed for graphics processing and rendering, restricting applications to stream processing with floating-point precision. This is acceptable for a large set of defense applications given that there is quite frequently a massive sensor (e.g. EO/IR focal plane array or RF aperture) that is streaming in data at an absurdly high rate. Additionally, there may be many sensor channels of time-correlated data that require single (or double) precision floating point math where calculation throughput has to keep up with the relentless real-time ingress of sensor data.

Early on, GPGPUs were restricted to research SBIRs and IRADs. Some defense programs did eventually pick them up for deployment, more typically via QRC programs. However, GPGPUs may finally be exiting the sandbox and on their way to being accepted as a mainstay building block in the heterogeneous collection of deployable processing technologies. From a silicon technology viewpoint, GPGPUs eclipse all other options in terms of performance measured in floating-point operations per second (FLOPS) for a given physical unit of Size, Weight, and Power (SWaP). This raw FLOPS to SWaP ratio continues to be on a very impressive growth vector as shown in Figure 1 where we see GFLOPS measured for various embedded and discrete GPGPUs from Intel, NVIDIA, and AMD devices spanning from 2011 to the present. 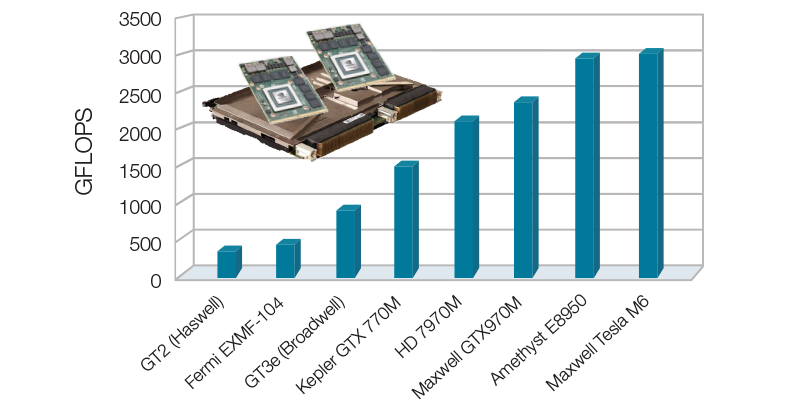 From a program logistics point of view, the big concern with discrete GPGPUs in the past was with the silicon providers such as NVIDIA and AMD, and what some would consider an insufficient level of support for the defense industry. This was both in terms of the silicon device’s appropriateness for SWaP constrained payloads and the truncated longevity of GPGPU device supply. Fortunately, these silicon providers have stepped up their game recently by forming internal business units that are focused on the embedded industry, including defense. Small embeddable modules such as MXMs are more readily available and are being kept around for a longer period of time, alleviating DMS issues.