The C-130 Hercules family has the longest continuous production run of any military aircraft in history. Over 40 models and variants of the Hercules serve with more than 60 nations. The United States Coast Guard (USCG) employs the HC-130H for long range search and rescue, drug interdiction, illegal migrant patrols, homeland security, and logistics. Currently, the life-limiting critical fatigue component for the C-130 fleet is the center wing box, making it a prime structural focus area. The safe useful life of the C-130 wing structure was called into question in 2002 following the highly publicized Center Wing Box (CWB) failure on a retrofitted C-130 fire tanker. At approximately the same time, the U.S. Air Force (USAF) was finding fatigue cracks in the CWB structure earlier than predicted by previous modeling efforts.

With a small fleet of C-130s (some of which were nearing the end of their service lives), the USCG expressed interest in participating in an assessment of the effects of corrosion and fatigue on the CWB with the U.S. Air Force Academy’s (USAFA) Center for Aircraft Structural Life Extension (CAStLE). The assessment plan included the teardown of a retired CWB, the development of structural damage management tools, and the collection of representative flight data for the purposes of updating and validating finite element tools. 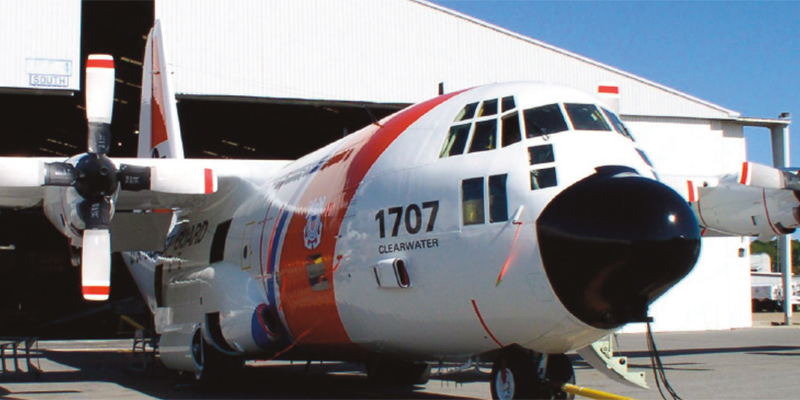 A U.S. Coast Guard HC-130H was instrumented with a Curtiss-Wright KAM-500 Data Acquisition Unit (DAU) which monitored the loading and environmental conditions affecting the CWB. The primary instrumentation consists of the DAU, accelerometers, strain gages, and sensors for cabin and pressure altitude, temperature, and humidity. Other aircraft parameters, such as true airspeed, weight-on-wheels, ramp door position, and flap position were also collected by an analog voltage monitoring module in the KAM-500 system. The new CWB life limit was defined in terms of USAF Equivalent Baseline Hours (EBH). EBH for any given flight is calculated by multiplying the flight hours by the mission severity factor.

Collecting aircraft parameters facilitates matching loads and environmental information to different phases of flight and flight conditions. Prior to this effort, usage and flight severity data were primarily inferred through surveys of aircrew and fleet managers. In five years of operation, the system has collected over 2800 in-flight hours of data during operational missions including a mix of ferry, training, sea surveillance, resupply, and search and rescue. With this flight data now in hand, survey data has been supplemented with actual usage data collected by the KAM-500 DAU. Originally intended to be a one year program, the data proved so useful the program was extended to 5 years. This data were used by the U.S. Coast Guard to assess and update the usage severity factors used to model life predictions whilst making fleet management decisions for the HC-130H, resulting in the previously mentioned life extension.

Download the case study to learn more about the solution and results.

Our modular data acquisition units (DAUs) let you create custom systems using COTS elements. Choose from a selection of chassis and over a hundred modules to create the exact combination to meet your requirements.

Curtiss-Wright is the largest rugged aerospace data acquisition provider in the world, with decades of experience as a trusted, proven leader in aviation technology. The Acra KAM-500 data acquisition system (DAS) is one of our most widely installed aerospace lines with over 14,000 systems shipped worldwide to date.

Modern aerospace instrumentation systems can be highly complex, and it can be difficult to know how to meet program needs. It’s not unusual for requirements to change during a campaign and cause significant delays, and data must be captured reliably no matter what – otherwise expensive additional flights will be needed or months of program data could be lost. Read our brochure to learn how you can reduce your risk with commercial off-the-shelf (COTS) solutions.