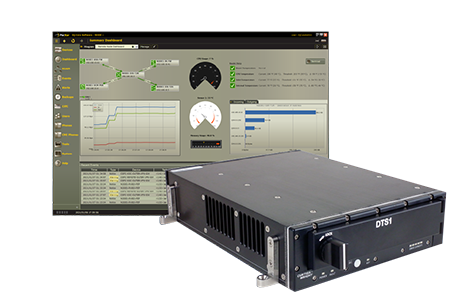 The demonstration showed the ability to monitor system information, drive capacity, voltage, temperature, and services status of the DTS1 over an Ethernet network using IQ-Core Software.  Data moving across a network using PacStar hardware is called data-in-motion (DIM) or data-in-transit (DIT), and data stored on a network attached storage (NAS) device, such as the DTS1, is referred to as data-at-rest (DAR). The ability to control and monitor hardware systems for both DIM and DAR data types raises the bar for system integration and interoperability. For example, essential network functions, such as IP address and supported protocol management and authentication of CSfC encryption layers, can be supported. Future enhancements could include IQ-Core wizards supplementing the command line interface of the DTS1.

The DTS1 uniquely incorporates two distinct layers of Commercial National Security Algorithm (CNSA) Suite cryptographic encryption into one device, making protection of Top Secret data more cost-effective and yet low risk. The diminutive DTS1 NAS device, which weighs only 3.77 lb. (1.71 kg) and measures only 1.5 x 5.0 x 6.5” (38.1 x 127 x 165.1 mm), delivers up to 8 TB of solid-state storage (SSD) with two layers of certified encryption. It supports the PXE protocol so that network clients on a vehicle or aircraft can quickly boot from the encrypted files on the DTS1’s RMC. This approach both facilitates software updates for network clients and significantly reduces size, weight, and power (SWaP) by eliminating the need for individual hard disks in each network client. Curtiss-Wright offers two layers of encryption in two mounting options of the DTS1: The VS-DTS1SL-FD is designed for cockpit use with DZUS mounting panel, and the VS-DTS1SL-F uses L-brackets to support very flexible mounting within space-constrained platforms. The DTS1 also supports a MIL-STD-1275 compliant filter to mitigate high voltage spikes, long voltage surges, and ripples that can reduce performance and reliability. Compliance with MIL-STD-1275 ensures system integrators that, in addition to airborne applications, the DTS1 can also be dependably deployed in land vehicle applications.

Previously, Curtiss-Wright announced that the DTS1 has been thoroughly tested and validated for operation at the extended -45º to +85ºC operating temperature range, per MIL-STD-810G methods and procedures, making the NAS device ideal for use in the harshest deployed military environments, including high altitude, long-endurance (HALE) UAS platforms. In addition, Curtiss-Wright recently announced that it had doubled the maximum storage capacity of the Removable Memory Cartridge (RMC) used in the DTS1 from 256 GB to 8TB, enabling it to support far longer missions for storing classified data on attended and unattended vehicles.

Curtiss-Wright Corporation is a global innovative company that delivers highly engineered, critical function products and services to the commercial, industrial, defense and energy markets.  Building on the heritage of Glenn Curtiss and the Wright brothers, Curtiss-Wright has a long tradition of providing reliable solutions through trusted customer relationships. The company is headquartered in Davidson, N.C., and employs approximately 8,200 people worldwide.  For more information, visit www.curtisswright.com.

Note: All trademarks are property of their respective owners.